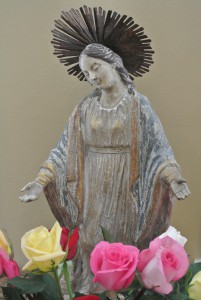 The Daughters of Mary (DoM) began on September 6, 2011 at St. Ignatius parish in Mobile, Alabama. The group has welcomed over 400 women in the Archdiocese of Mobile,  Alabama, meeting weekly for prayer, reflection and renewal. Heeding Pope Benedict XVI’s counsel to women to be guided by “Mary, teacher and model of prayer,” these women are formed by prayer in the Marian tradition and by Gospel meditation.

Established as a counterpart to Men of St. Joseph, the Daughters of Mary is developing its own identity with its own uniquely feminine energy. The mission is simply stated: Prayer—Spiritual formation in the Marian tradition; Reflection—Insight into the meaning of the Gospel for contemporary woman; Renewal—Creating a culture of faith for family, Church and community. It has received the approval of Most Reverend Thomas J. Rodi, Archbishop of the Archdiocese of Mobile.

Daughters of Mary is modeled after the experience of Mary, the Mother of Jesus.  Historians believe that Mary, as a young Jewish woman, in the small Galilean town of Nazareth, would have attended Synagogue. She would have joined with other women, meeting separately from men, to pray and reflect upon Scripture and converse about spiritual matters. The first purpose of Daughters of Mary is to prayerfully bond with other women, just as Mary most surely did..

Each DoM meeting begins with an invitation to pray for a specific grace, and with an acknowledgment of the way in which Mary exemplified that grace.The prayers of the day modeled after the Liturgy of the Hours include intercessions and reflective music. After a reading the Gospel for the upcoming Sunday, a reflection is presented by one DoM member. Following this, there is time for shared reflection and insight, and spiritual conversation. Closing prayers include the Memorare for vocations to the priesthood and religious life, and the Hail Mary.

Fr. W. Bry Shields, Pastor of St. Ignatius Parish has advised and participated in the group from its beginning. He said of the group’s formation and mission, “The Daughters of Mary is a wonderful initiative which has sprung up at St. Ignatius Church. Open to all women in the parish, the Daughters of Mary meet each week for prayer, instruction, and reflection on the Gospel reading for the following Sunday. As a Pastor, I could not be happier with the fruits of this spiritual endeavor –the DoM is truly helping women in our parish to find an authentic devotion to Mary, and to foster for themselves and their families a spirituality centered around the Sunday Eucharist.” 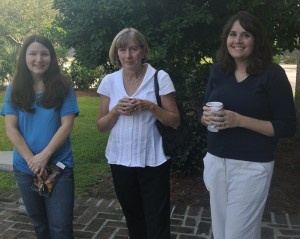 The Daughters of Mary introduced its logo, designed by St. Ignatius parishioner Margeaux Bodet. It is inspired by the coat of arms of Blessed John Paul II, who has been referred to as a “very Marian Pope.” John Paul’s coat of arms featured an “M” beneath the right arm of the Cross. For John Paul II, the “M” referred to Mary’s station at the foot of the Cross, signifying her vocation as Mater Dolorosa, Mother of Sorrows. “John Paul II’s symbol has a contemporary simplicity rather than the ornate design of the Middle Ages. This was particularly appealing to the DoM Coeur Committee who discerned for several months before deciding upon a monogram,” DoM’s founder and facilitator Deborah Madonia stated. “We seek to embrace and adapt the Marian tradition in ways that can be appropriated by women of our time, women who face a world that is complex and challenging, and constantly changing. The “D” interconnects to the “M” to signify our hope that the “exceptional link to Mary” that John Paul II writes about in his Apostolic Letter, ‘Mulieris Dignitatem,’ ‘On the Dignity and Vocation of Women,’ will be sustained.” 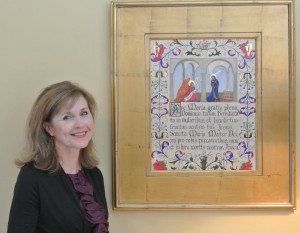 The Daughters of Mary calls its membership to genuine conversion. Women are called to meet God anew each day. One participant said of her experience: “The weekly meetings of have truly deepened my understanding of Scripture, my relationship with Christ and my devotion to the Blessed Mother. The commentary and reflection on the Sunday Gospel gives me a renewed energy and enthusiasm for the Sunday liturgy. The journey from one week’s Gospel to the next, the perspectives of the weekly commentary, the time for contemplation, all these aspects of our prayer allow me to see the ‘big picture,’ connecting Old Testament to New Testament, seeing the evolution of Christ, who is both human and divine, unfold from infancy to manhood, through His ministry, His passion and His death. I am developing an intimate appreciation for the graces of Our Lady. “

In Lumen Gentium, we are told that Marian devotion is “not just one optional expression of piety among many; it is truly a solemn obligation that every single one of us share,” (52). Daughters of Mary view this as a call and seek a devotion to Mary amidst the complexity and confusion of contemporary life. The goal is to revere Mary, and at the same time, live in accord with the teachings of her son Jesus Christ. Daughters of Mary are faithful women who hope to model the Marian lifestyle.